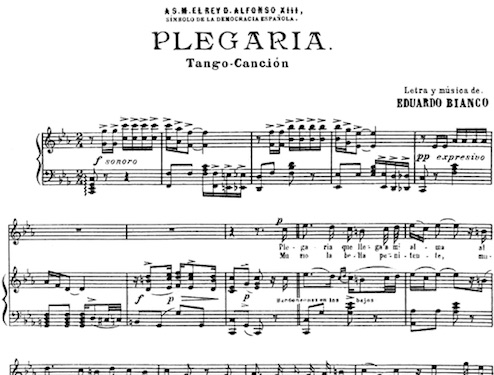 Plegaria – The Tango of Death

There are several recordings of the tango Plegaria (Prayer) dating back to the 1920’s. However, the one we hear at milongas is the version recorded by Osvaldo Fresedo -> Listen to Plegaria

The music is melancholy, especially as expressed by his vocalist Ricardo Ruiz. Its history is even more so. From the book “Tango of Death” by the scholar John Felstiner we have the following:

Not far from Czernowitz, at the Janowska camp in Lemberg (now Lvov), an SS lieutenant ordered Jewish fiddlers to play a tango with new lyrics called “Death Tango” for use during marches, tortures, grave digging, and executions. Then, before liquidating the camp, the SS shot the whole orchestra. This “”Todestango” of which a recording exists, was based on the Argentine Eduardo Bianco’s greatest prewar hit.

Plegaria was written by Eduardo Bianco, generally assumed to have been a Nazi sympathizer. He also first recorded it in 1927, and then again in 1939 -> Listen here (also click the “show more” in the youtube clip for additional info)

Since Fresedo recorded his Plegaria in 1940, one assumes that he was not aware of the sad unfolding history surrounding the song.  In addition to Plegaria, Bianco wrote and recorded other tangos. He even collaborated in the lyrics and first recorded one of the favorites of many tangueros: Poema

And so it is perhaps appropriate to quote the great Greek philosopher Plutarch (CE 46-120).

“It does not of necessity follow that, if the work delights you with its grace, the one who wrought it is worthy of your esteem.”