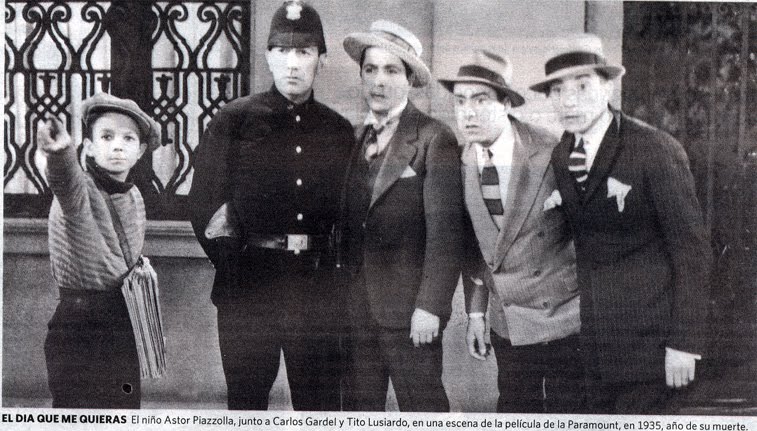 Anyone who is familiar with tango knows the names Carlos Gardel and Astor Piazzolla.  However, few know that they are connected.

Gardel created much of what we think of today as tango, even though his many recordings are not played at milongas.  However, he (co)wrote a great number of songs which are played at milongas, and the immense influence of his recording of Mi Noche Triste is discussed in many places such as Wikipedia: It was the first time a tango had lyrics to be sung with it.  ……With Mi Noche Triste, the birth of sentimental tango took place. Nostalgic, melodramatic, sad, the new lyrics and the music that was created for them, embodied Buenos Aires and its people……

Sadly, Gardel’s life was cut short when he and his entourage perished when their plane went down during a tour in 1935.

Most people identify Piazzolla, another icon of 20th century tango, with his later music which is seldom played at milongas, but often used for performances:

Some don’t realize that earlier, when Piazzolla and Fiorentino split from the orchestra of Anibal Troilo they recorded many milonga quality songs:

However, none of the music of Piazzolla would exist today had providence, or more precisely Piazzolla’s father, not intervened in 1935. As a youth, Piazzolla lived in New York, and in 1934 Gardel was in New York and crossed paths with the young Piazzolla.  He took a liking to the 14 year old and even gave him a bit part in his movie El Dia Que Me Quieras. When he was about to leave for his next tour, he invited Astor to join them.   His father said no, telling him he was too young.  This was the fateful tour in which Gardel and his entourage were lost. In later years Piazzolla would say that were it not for his father “I would be playing the harp, not the bandoneon.”

For more entertaining details about their time together see the book of Maria Susana Azzi and Simon Collier (scroll down to pp. 15-17).